Posted on December 23, 2015 by thehistoryofbyzantium

While on holiday I was reading about the refugee crisis and decided to write this article. I thought you might enjoy…

1300 years ago a boy was dragged from his home and taken to Europe. We should remember the vital role he played in world history.

Did you hear the story about the Syrian refugee? The one about the boy named Konon from a Christian family living near the border. As a small child he was forced to flee his home and migrate across Turkey to a Greek port. You can imagine where the story goes from there. 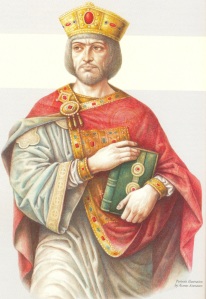 Leo III (from ‘Rulers of the Byzantine Empire’ published by KIBEA)

His family was given prime farming land by the European government. Then he was offered a lucrative career in the army. Finally aged just 32 he became the most powerful politician on the continent and emerged victorious from one of the most important battles in world history. You must have heard this story before?

These events took place between 685 and 718 AD. This period of history offers a strange reflection of our own time as if glimpsed in a fairground mirror. The Middle East was in ferment with war and political chaos everywhere. Refugees were arriving in Europe by the boatload and precious relics from the past were being smashed to pieces.

But the Arab peoples were not the ones suffering from the tumult. Instead they were the military superpower looking to extend their influence. A generation after the Prophet Muhammad passed away (c632) the Arabs had united under one government for the first time. A Caliphate. The model of Muslim government which IS wants to recreate today.

It was the European power that was collapsing into civil war and suffering fresh disasters every day. The Eastern Roman Empire (often called Byzantium) had been shocked by the arrival of the Arab armies. Shoddy military intelligence left them unprepared for the assault and the provinces of Egypt, Palestine and Syria slipped from their control in barely eight years.

The Caliphate of the 7th century was a largely tolerant place though. No strict codes of behavior or dress were handed down. If people were prepared to continue their lives as before then they would be left in peace.

Those who did flee to Europe were not housed in camps or left to wait on beaches. On the contrary the shell-shocked Romans needed every ounce of talent they could find. These people were given empty land to work or encouraged to work for the state. During a break in the fighting the Imperial government ordered troops to cross the Taurus Mountains (the border between the two Empires) into Syria to deport local Christians. These former Romans had remained to work the land within the Caliphate but were now moved ‘home’ at the point of a sword. One such family was that of young Konon.

Konon’s unique experience would take him far in the Roman world. The trauma of being uprooted and having to start a new life hundreds of miles away made him tough and flexible. Once fully grown he joined the army and was quickly promoted to become an officer with considerable responsibility.

The conflict he found himself in the middle of was a clash of civilizations. Instead of western powers dictating democratic solutions, it was the Arabs who were reshaping the world to their way of thinking. The Caliphate was on the warpath and had the Roman capital Constantinople (modern Istanbul) was in its sights. The anger and frustration which fuels IS-like organisations today was being felt on the European shore. The Romans had been successful for a millennium and now suddenly found themselves impotent in the face of Arab power.

By the summer of 717 their capital was surrounded by a huge army and fleet. If the city had been incorporated into the Caliphate then the future of Europe would have changed beyond all recognition. But it didn’t, thanks in large part to Konon.

He had grown up around the Arabs and may have spoken the language. He was a senior general by 717 and as they approached the city he was given the ultimate promotion, to Emperor, to deal with the crisis. Through skillful diplomacy and ruthless warfare the Syrian refugee, now known as Leo III, saved the Roman world.

This battle is largely forgotten today, yet we should remember its significance in shaping the modern world. Constantinople would not ultimately fall until 1453 leaving Western Europe to develop its unique culture. Only four decades after the Roman state finally disappeared Christopher Columbus set sail for the New World.

Perhaps we should also look differently at those desperate to reach Europe today. They may possess the talent and the perspective to shape the world of tomorrow.

Robin Pierson is the presenter of The History of Byzantium podcast. The story of the Eastern Roman Empire from 476-1453.

12 thoughts on “The Syrian Refugee who changed Western Civilization”