Posted on June 28, 2013 by thehistoryofbyzantium 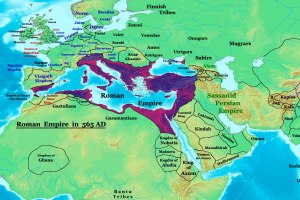 Byzantine Empire at its greatest extent, 565

The men Justinian puts in charge of his military operations keep getting older or more unlikely as the 550s unfold. However they bring success in Italy, the Balkans, Lazica and then most surprisingly in Spain. The peace these victories bring allow the Emperor one last chance to bring the Orthodox and the Monophysites together.

Map: The map shows the political distribution of states and nations in 565 AD.